The Skin I Live In - A New Shocker from Spain

Noted director Pedro Almodovar steps firmly into horror territory with THE SKIN I LIVE IN (LA PIEL QUE HABITO). Based on Thierry Jonquet's TARANTULA (MYGALE), the film so horrified certain audience members at its Cannes Film Festival premier that groups left the showing before it was over. But it also received a five minute standing ovation from those hardy audience members who stayed and viewed the entire film.

SPOILERS AHEAD... Starring Antonio Banderas and Elena Anaya, the horror thriller concerns a plastic surgeon who seeks vengeance on the person who raped his daughter. The daughter kills herself after the brutal violation. The Banderas character, Dr. Robert Ledgard, kidnaps the rapist and performs a sex change operation on him, transplanting his daughter's face onto the rapist. He then rapes the rapist!

Strong sexually violent scenes and abundant nudity are sure to make this a controversial film that will be seen and talked about by many aficionados of shocking horror. The film should arrive in the United States in November. 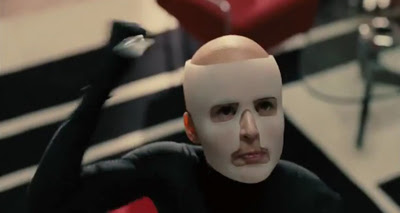