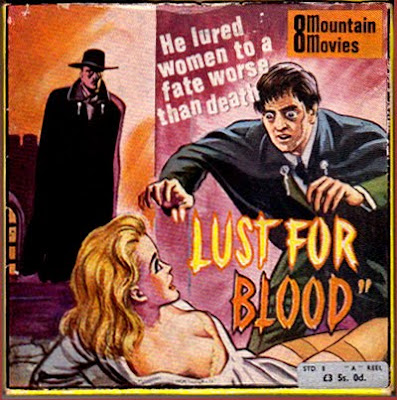 Here is the second Mountain Films' 8mm silent taken from Jess Franco's GRITOS EN LA NOCHE (American title: THE AWFUL DR. ORLOF). Catalog number T218. Side description: "MORPO--is he man or monster? A blood sucker who continually seeks the fresh blood of lovely young women and lures them to a fate worse than death." The character's name should be spelled Morpho, and unless I'm missing an element of the original film, there's no bloodsucking done by him, but it's good ballyhoo anyway.

The cover hints at what "the fate worse than death" may be.
Posted by Mirek at 7:00 AM