Insights from the Naschy Auction 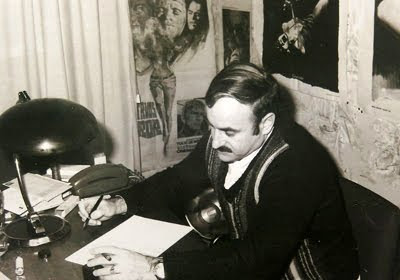 The above photo shows Paul Naschy in his Madrid apartment, pen in hand, working over (presumably) a film script of his own. Note the Naschy film posters, the cigarillo between his fingers, the fact that he's right-handed ... the small things one notices when studying a photo. The photo is being used as illustrative of an auction being offered by Marc Van De Wiele Auctions of four Naschy scripts, with three of them being in Naschy's own hand.

Like the photo above, auctions can illuminate, and these do.

First, the descriptions from the auction house:

This is Jacinto Molina's original, entirely handwritten manuscript (297 pages, size : 31,5 x 21,5 cm) of "La Inquisición" (1976), his first film as a director/writer/actor which therefore marked an important turning point in his career. In this movie, which also starred Daniela Giordano, Monica Randall and Juan Luis Galiardo, he played the part of the diabolical Bernard de Fossy, inspired by the infamous Torquemada. In interview, Molina always stated that the Spanish censor forced him to replace Torquemada's name into that of de Fossey.

Jacinto Molina's original, entirely handwritten manuscript (184 pages, size : 31,5 x 21,5 cm) of "La Noche del Hombre Lobo", which was released as "El Retorno del Hombre Lobo" in 1981. It was the first of his werewolf films which he directed, opposing the tragical Waldemar Daninsky against Countess Bathory (portrayed by Julia Saly). The picture also starred Narciso Ibanez, Beatriz Ellorrieta and Silvia Aguilar and was awarded several prizes at European film festivals. The stenciled shooting script (129 pages, size : 27,5 x 21,3 cm) with dedication on the cover, is offered together with the original manuscript. 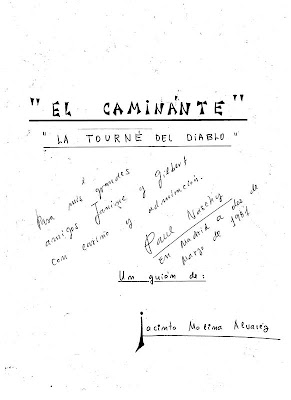 Jacinto Molina's original, entirely handwritten manuscript (217 pages, size : 31,5 x 21,5 cm) of "El Caminante" (1979), a philosophical fantasy tale in which Paul Naschy played the part of the devil opposite such stars as Blanca Estrada, David Rocha and Silvia Aguilar. Probably one of his best pictures as a director, the film was warmly welcomed by the critics but failed to become a major commercial success. Dedications on the title page of the script and signed by Jacinto Molina.

Jacinto Molina's own personal shooting script of "Walpurgis-Night", directed by Spanish veteran filmmaker Leon Klimovsky which was released as "La Noche de Walpurgis" in 1970. It became an instant hit not only in Spain, but internationally as well. On the cover of his script (79 stenciled pages, size 27,5 x 21 cm), Molina wrote in his handwriting "Waldemar Daninsky - Paul Naschy". The shooting script also includes 12 pages of handwritten phonetical notes that Naschy had to memorize, so as to give the impression that he spoke his lines in English (a language he didn't know at all). The film was indeed set up as an international co-production and was shot in English.

So, of interest is that Naschy wrote his scripts in longhand, something I was aware of but many weren't. Indeed if you watch Naschy at a typewriter in LICANTROPO, you will see, as his forefinger hits this key and that, that he was not that familiar with working with the machine. His scripts in longhand would be typed up by someone else afterward.

Then of interest are the original, working titles of these four films. INQUICISION and EL CAMINANTE were initially LA BRUJA Y EL INQUISIDOR (THE WITCH AND THE INQUISITOR) and LA TOURNE DEL DIABLO (THE DEVIL'S TOUR). The auction description indicates that Naschy's script for LA NOCHE DE WALPURGIS carried the title WALPURGIS NIGHT, which would make sense, if true, as this film was particularly crafted for English-speaking audiences. Regarding Naschy's phonetic script for WALPURGIS NIGHT/LA NOCHE DE WALPURGIS (eventual English title: WEREWOLF SHADOW), a couple of sources indicate that he tried to make the attempt, but dropped idea when the execution proved too difficult. LA NOCHE DEL HOMBRE LOBO was released in Spanish as EL RETORNO DEL HOMBRE LOBO, but the export English title--THE NIGHT OF THE WEREWOLF--was a translation of the original Spanish title.