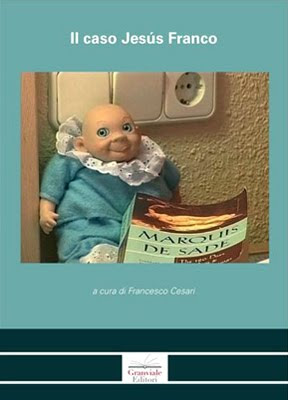 "On December 2nd 2009, I arranged a short study congress on Jess Franco, here in Venice. The proceedings of that congress became the book, but with some changes and additions. Firstly, there are two forewords by two of the greatest experts in Jess Franco: Robert Monell from USA and Alex Mendibil from Spain, as well as my 'introduction' as editor. Then, there are the essays of the Italian experts - Roberto Curti and Alessio Di Rocco - who couldn't be in Venice the day of the congress. We also preferred to interview Antonio Mayans, instead of asking him [for] an essay, and added a short interview with his daughter Flavia, the protagonist of some 80s JF films.... Everybody wrote in his language. Some essays are in Italian, some others in Spanish. And Robert's foreword is in English.

"Ferran Herranz wrote a kind of 'essay-book' (almost 50 pages) on Jess Franco and Literature. A terrific work, in my view. My Italian friends Roberto and Alessio worked on Jess Franco's (mis)fortune in Italy: the historians, the critics, the newspapers (the book includes an anthology of Italian reviews, from 1963 to 1984), the editions, the censorship (knowing the original documents, Alessio could specify cuts, versions, runtime), an Italian versions filmography based on VISA.

"My essay is in Italian even if the title - Jess the Trickster - is in English. The essay begins with a quotation from a Robert Monell's post on Latarnia forum.

"I also worked to a JF filmography as director. The book is 222 pages (including the images) + 25 pages of index (index of names and index of titles). We did it almost without money and the run is very short."

The cover image is from Franco's INCUBUS.

Below is a copy of the contents (click on photo to see enlarged version):