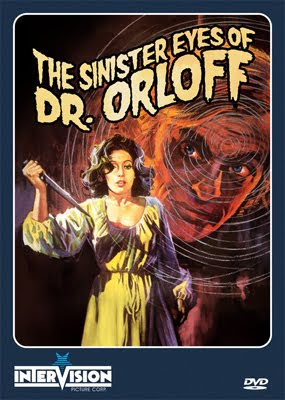 There's a new DVD company that while it may be new is not above using old ballyhoo to promote its releases. Founded by Larry Gold Sr, "one of the few true legends of the video industry," according to Jay Douglas, the Vice President of Product Development at CAV, Intervision promises the DVD release in January, 2011 of two Jess Franco titles: THE SINISTER EYES OF DR. ORLOFF paired with PAULA PAULA. The appearance of the latter is curious, as a DVD was released not too long ago, but the promo on SINISTER EYES is, well, if not misleading--potentially an outright lie.

"THE SINISTER EYES OF DR. ORLOFF, a long-thought-lost classic from 1971, was finally unearthed in a Budapest vault following an exhaustive international search," states the press release on cinesploitation.com.

On Gold's own Intervision website, we get this: "A legendary lost film in the Franco canon, it had long been feared that no element simply existed. That's when Jess stepped up with a rare 1-inch master, culled from his personal vault in Malaga. It comes equipped with a cracking little featurette on the origins of Orloff, one of the great villains in 20th century horror. And I must say, William Berger just might be my favorite Orloff of all time. You owe it to yourself to check this beauty out."

Hm, aside from the curiosity of Franco having his own personal vault in Malaga but the film being found in Budapest (a long way from Malaga)--well, fine, but I have an official Spanish video of THE SINISTER EYES OF DR. ORLOFF laying around in my apartment--and I'm sure I'm not the only one who has this video--or a bootleg of it.

And there's even a Spanish DVD from the Vellavision label....

So who is this Gold person? I never heard of him, but I've never been involved in the behind-the-scenes movers and shakers of the video business. Gold himself informs us of his connection with Uncle Jess:

"Over the decades, Jess and I have worked together too many times to count. We've had our share of dust-ups, break-ups, and make-ups. I proudly count Jess as one of my best friends still living."

Okay, but I still haven't heard of him. But, then again, I couldn't remotely claim to know the persons who have been in and out of Uncle Jess' life.

If you check Gold's supposed old London-based distribution company--Solid Gold Films Ltd--on the IMDB, you will find it MIA.

According to the Intervision site, Gold now lives in Thailand. (!) But he has an LA address. He also states on one page that his "old compatriot," Jess Franco, made 1000 films, while on another that he made 200 films.

If one checks the video promo for the company on its Facebook page, one sees that the SINISTER EYES clips are full screen, which makes me suspect that the DVD will be sourced from...that "lost" video/DVD Spanish element.

BTW, this lost baby has already been through the torrent mill: 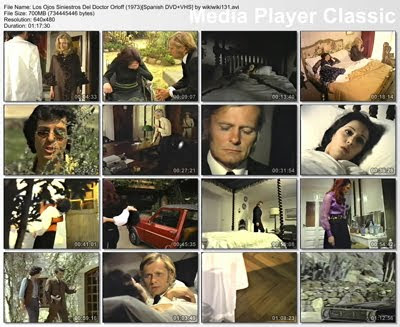 Now, in the beginning I said that the "lost" claim was potentially a lie. The only thing that would make it not so is if we see a version we've never seen before, either with nudity or in English dubbing. Otherwise, buyer beware as far as the claims for this release are concerned.
Posted by Mirek at 5:53 PM