SHADOW OF THE WEREWOLF

During this Naschy Blogathon week (Nov. 29 - Dec. 3), I will be posting some Naschy rarities. Here is the first one: 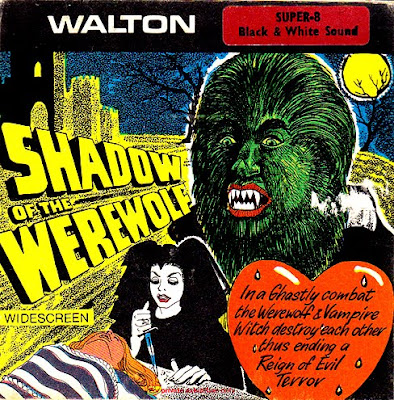 Walton, a British 8mm/Super 8mm company, released a very condensed version of Naschy's LA NOCHE DE WALPURGIS (English titles: WEREWOLF SHADOW, THE WEREWOLF VS. THE VAMPIRE WOMAN). In Super 8, with sound and in widescreen! (But a murky black-and-white). I'm guessing this release occurred somewhere in the 1970s.

The catalog number was A.821. The description:

"A young detective is shocked by the sudden disappearance of his fiancee but due to many sinister rumours he decides to visit the owner of a certain lonely house."

The short film contains a dialogue scene between Waldemar Daninsky (Naschy) and Marcel (Andres Resino) and ends with the climatic battle between Daninsky as a werewolf and the vampire countess Wandesa (Patty Shepard).
Posted by Mirek at 7:31 AM