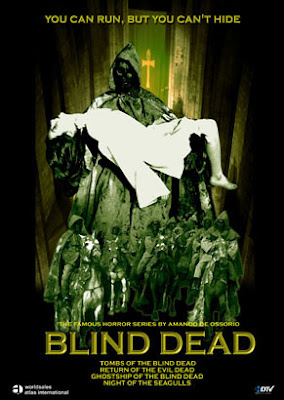 Enterprising DVD companies can secure licenses to release THE BLIND DEAD COLLECTION from Atlas International. This is the company's online promo for this quartet of films directed by Amando de Ossorio:

They are called THE BLIND DEAD, heretic horsemen whose eyes were burned out to prevent them from finding their way back from Hell. Over the course of 4 unforgettable films, writer/director Amando de Ossorio created what fright fans worldwide consider to be one of the most startling series in horror history.

This unique quartet of shockers delivers a relentless onslaught of creepy atmosphere, shocking violence, forbidden sexuality, and the still-chilling icons of EuroHorror: The eyeless undead who hunt by sound in their quest for human flesh. Don’t move… don’t breathe... don’t let them hear your heart beating: THE BLIND DEAD are back!

Atlas has held the international rights to these films for a while, and the first two in the series (TOMBS OF THE BLIND DEAD and RETURN OF THE BLIND DEAD) even much earlier. The first Blind Dead films to reach DVD (on Anchor Bay) were from Atlas. Later Blue Underground released all four films in a box set, also working with Atlas and other rights owners. Though a commendable release, the transfers in the Blue Underground box set had problematic tinting (from Blue Underground), and these transfers may be the ones that are being offered from Atlas. Any new DVD releases, "in heart-stopping High Definition," should be sourced from new transfers that take into consideration the original look and dynamics of films.

A recent check of the Atlas catalog reveals that the company is NOT offering The Victory Media Library, that series of HD Spanish horror films from which BCI/Deimos received its wonderful quality Naschy and Ossorio films several years ago. I'll be investigating this further to determine who currently owns this important library, which includes the uncut MALENKA and the rare STRANGE LOVE OF THE VAMPIRES.
Posted by Mirek at 7:46 AM