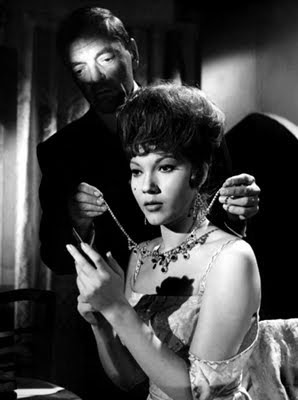 Above: Howard Vernon and Maria Silvia

Rightfully called the first Spanish horror film and advertised as such in its Spanish premier release, Jess Franco's 1961 GRITOS EN LA NOCHE (SCREAMS IN THE NIGHT) did not receive popular or critical acclaim in its international exhibitions. In the United States, Franco's film was titled THE AWFUL DR. ORLOF and placed at the bottom of a double-bill under Riccardo Freda's THE HORRIBLE DR. HICHCOCK. Both films were savaged critically, but are now considered classics of euro-cult.

GRITOS EN LA NOCHE is indeed a classic and remains one of Franco's best films, despite his deprecatory stance on the film in the last couple of decades. Because of Franco's own proclivities and co-production assistance from France's sleaze-meisters Eurocine, there's a palpable essence of depravity to the film that was once upon a time attacked, but now, in more liberated times, is looked upon in a different, more natural and appreciative erotic manner. Franco gathers in influences from DEAD EYES OF LONDON, PHANTOM LADY, and EYES WITHOUT A FACE (which Franco claims he did not see beforehand, though he certainly must have known of that film's international popularity), and, for a bolder export version, inserts (literally, these are inserts) shots that would have been welcomed by the "raincoat crowd" at nudie film showings.

The nude scenes only surfaced here on DVD from Image in 2000 in its "EuroShock Collection" series. Though it was revelatory to see them, they don't add much to the film. The one that's supposed to be of actress Diana Lorys' breasts is obviously not of her but a body double, so that's temporarily distracting, too. (Later in her career and in a sexually freer Spain, Lorys would shed her clothing with bravado for director Franco.)

For Spain GRITOS was a shock, as that the country had never seen anything homegrown like it. Or rather it would have been a shock had more people filled the theaters to see the film. The country was not yet ready for accepting the work of native sons in the horror genre, nor knowledgeable or interested enough to realize that Franco was making a bold and even revolutionary statement within the context of Spanish film as it was at this time. It wasn't just the eroticism of equating sex with forced ravishment, but the youthful energy of the film, its experimental, jazzy musical score feeding the impulses of rebellion and rape. Regarding the latter, Dr. Orlof (one "f" in this film, two in future Orlof films) creates seedy scenarios to trap women in deserted places, so that he can kidnap them for experiments--yes, non-sexual violations of their faces and bodies, but violations nevertheless. His sightless and mute assistant Morpho is the younger partner in these crimes, the virile one if you will, the one with the physical power to capture and bind these attractive, bosoms-overflowing cabaret performers, who are equated as prostitutes in GRITOS.

For all his leering, Howard Vernon's Orlof is rather asexual, a cold scientist impassioned only by the love he has of his daughter. This icy heart is what makes him more dangerous when he meets his victims, as you realize he could murder any of them without relapsing into a guilty conscious.

No wonder the critics pounced with moral disgust.

The critics did not see the craftsmanship behind the film, the spot-on cinematography of Godofredo Pacheco complimenting Franco's already sharpened and inspirational directing skills. Hemmed in by traditional moral codes, they retreated even more by hurling acidic barbs at the film and its makers, as if to protect themselves from acknowledging their own dark desires.
Posted by Mirek at 8:06 PM