This is the NTA Home Entertainment video release of AGAINST ALL ODDS, known also as FU MANCHU AND THE KISS OF DEATH and THE BLOOD OF FU MANCHU. A copyright on the cover states 1985, but the copyright on the video label claims 1987. The copyright was held by Republic Pictures. 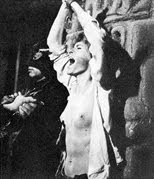 What made this release unique is not the content, but the back cover, which showed a nude scene, alerting Francophiles that there existed, at the very least, nude promo stills for the film, a film that before had been considered free of nudity beforehand. Eventually, for Blue Underground's DVD release as THE BLOOD OF FU MANCHU, nude scenes were shown for the first time. Despite the photo on the back cover, the NTA release did not contain nudity.
Posted by Mirek at 9:43 AM