The Dilemma of a Potential Masterpiece - THE VALDEMAR LEGACY 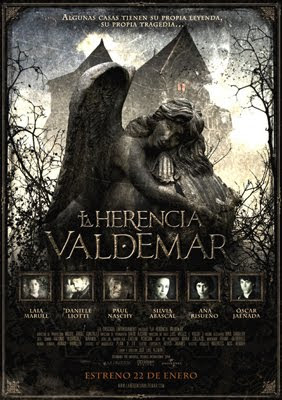 THE VALDEMAR LEGACY (LA HERENCIA VALDEMAR), also known in English as THE VALDEMAR INHERITANCE, was released theatrically in Spain in January 2010, with a Spanish DVD release following in June. The attention given this film was considerable, as not only it was, at over 20 million dollars, one of the most expensive films made in Spain, but it purported to be a lavish undertaking in the Lovecraft cosmos, surely the most elaborate yet offered up on the screen. As an added interest, it also contained the last on-screen performance of Paul Naschy, Spain's legendary horror man.

Unfortunately ticket sales proved lackluster and audiences grumbled about this and that, especially as they seemed unaware that the film was actually part one of a two-part project and that they would have to wait until the fall when the second part, THE FORBIDDEN SHADOW (LA SOMBRE PROHIBIDA) was going to be screened.

Having viewed the Spanish DVD (thanks, Elena), I can say I'm very hopeful that the second part will confirm what I've gotten from the first--that THE VALDEMAR LEGACY may be a masterpiece of Spanish horror cinema, a film that bravely places itself out of the current ethos of horror to luxuriate in a more old-fashioned sensibility of building up plot and suspense, nurturing both with care and consideration for the overall effect. Not that the modern style of direction, under the capable hands of Jose Luis Aleman, or the contemporary flourishes of editing and music are missing from THE VALDEMAR LEGACY. They are not. But other, older features are around and placed to the forefront many times. The result generates a feeling of an exquisite world that is part distant dream, part contemporary reality. Curiously, VALDEMAR somewhat shares this nether old-time world fantasy kinship with Universal's recent THE WOLFMAN, which likewise straddled cinematically both the past and present--and, like the VALDEMAR film, was not as well received as anticipated. (Universal is distributing THE VALDEMAR LEGACY in Spain, btw.)

The question for us in the United States becomes--is this film sell-able here? Can it be shown theatrically?

I doubt it will be possible to show this film as it has been in Spain--as part 1, and then months later, part 2. As it is, American audiences will have a hard time heading over to see a Spanish horror film (despite the successes of a few recent Spanish horror films), and they will not endure the possibility of waiting months to see a story's finish. No, to be shown theatrically, this film has to be presented in whole, as a three-hour plus epic, with an intermission coming in after the first part. Such a presentation would mean, of course, a limited theatrical distribution and more to art house theaters that can accommodate such special handling; otherwise the film will never get any theatrical release, unless at horror genre film festivals, which are limited in scope and audiences.

For DVD purposes, I think it would be well to offer the film up as a double DVD set, for the same considerations as for a possible theatrical release.

I've yet to see the second part, of course (it will be premier in Spain in October), but if the second part does live up to my expectations, then we may have a gem, or a least a diamond in the rough, to savor and contemplate. So I'm very much looking forward to part two, which, since I'm not in Spain, will have to arrive for me only when the Spanish DVD is finally released months after the film's theatrical release. 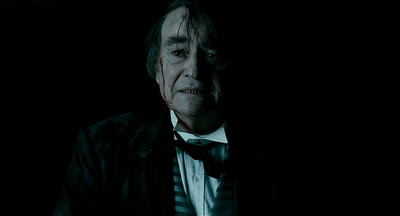 In his last on-screen appearance, Paul Naschy offers up a performance as the protective and faithful servant Jervas that must rank as one of the best in his career. Will American Naschy fans be able to see his work in a theatrical release?
Posted by Mirek at 9:48 PM