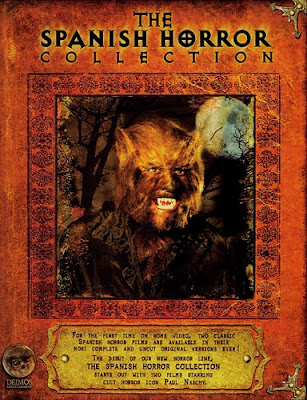 In 2006, when BCI/Deimos was putting together the first of its Spanish horror DVDs, the company printed a promotional 4-page folder for the future of these releases. As you can see the graphics were completely different than what actually came out. The series was going to be titled "The Spanish Horror Collection," but that was dropped as it was felt that sales would be lessened by the foreign tag of "Spanish".... Also the design was changed, too. These were initially going to look like ye-olde books. And there was going to be numbering on the spine to spark that collectivitis among fans. Also, note that the idea was to put out the series in HD DVD, but that, too, didn't come through, when Blu-Ray started to win the marketing war. (BCI/Deimos eventually released a Blu-Ray combo of NIGHT OF THE WEREWOLF and VENGEANCE OF THE ZOMBIES in 2008.) 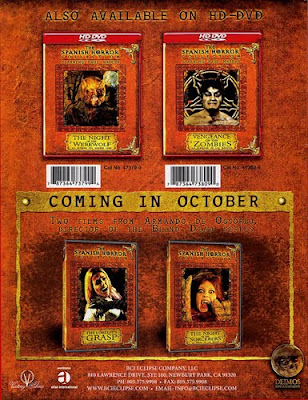