Jason Dark and the Ghosts Templar

While searching for Blind Dead graphics on the internet, I came upon something that made me immediately stop. This: 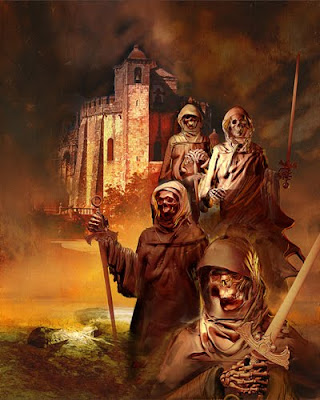 If you're like me, your jaw drops as you gaze upon this wondrous, previously unseen artwork featuring Amando de Ossorio's "Blind Dead" Templar Knights. I had to investigate what this was all about. I found out that the artwork was the cover for one of the volumes in the Jason Dark series of adventures, a newly-minted series that's an intriguing throwback to the dime-novel/pulp world of the past. The stories concern Jason Dark, a Geisterjäger (ghost hunter), who together with his assistant Siu Lin battle all sorts of macabre demons and monsters in Victorian England. The milieu is unabashedly Gothic, with inspiration taken from German pulps of the 1970s and classic horror and euro-horror cinema. The novels (or rather novelettes) are fast, captivating reads in the best page-turning tradition of the pulps, and even feature the pulp premise of including the first "hook" chapter of the next volume at the end. The project is the work of Guido Henkel, a German PC and video game developer, who was involved with REALMS OF ARKANIA and PLANESCAPE: TORMENT, among other games.

What amazed me, as I dug deeper into the Jason Dark series is the sheer, joyous brilliance of the project: A revival of the dime-novel or pulp adventure tale, available as a smaller-size hardcopy of 64 pages or an online download--and, at least now, available for reading online for free. The Jason Dark website is as professional as you can get (Henkel has years of experience with his DVD Review & High Definition), and features the latest news, a download area, a forum, a store, etc. 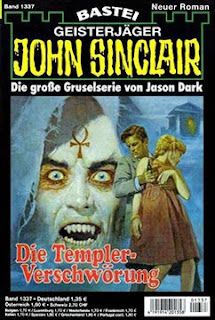 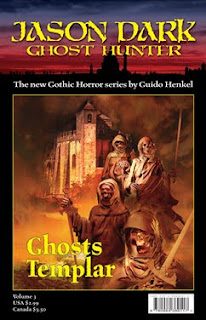 I sampled GHOSTS TEMPLAR online, but when I received three volumes of the series, instead of giving GHOSTS TEMPLAR a better read, I picked up THE BLOOD WITCH under some uncanny impulse and only sleep made me put it down. The villainess in THE BLOOD WITCH is named Asa Vajda. If that name is familiar, it should be. Asa Vajda is the witch in Mario Bava's BLACK SUNDAY.

So you see the potential here. A fun, pulp series that encompasses not only traditional demons and monsters, but those from the world of euro-horror, including Spanish horror. Do I see Morpho potentially lurking in the background? Dr. Orloff? Or perhaps Waldemar Daninsky?

Incidentally, I found out that Templar cover is the work of Gary Crump. Henkel created a general cover design, using the Blind Dead posters as inspiration, and Crump took it from there. Excellent work and, again, in the best tradition of the pulp.

I wish Guido Henkel and this project much success. It's thrilling to see someone attempt something like this--and in such a grand, entertaining style.

[I have to mention a neat item being offered from the Jason Dark website that Spanish horror fans may want near their computer--a mouse pad featuring the same Templar artwork as shown above. Proceed here for more details.]